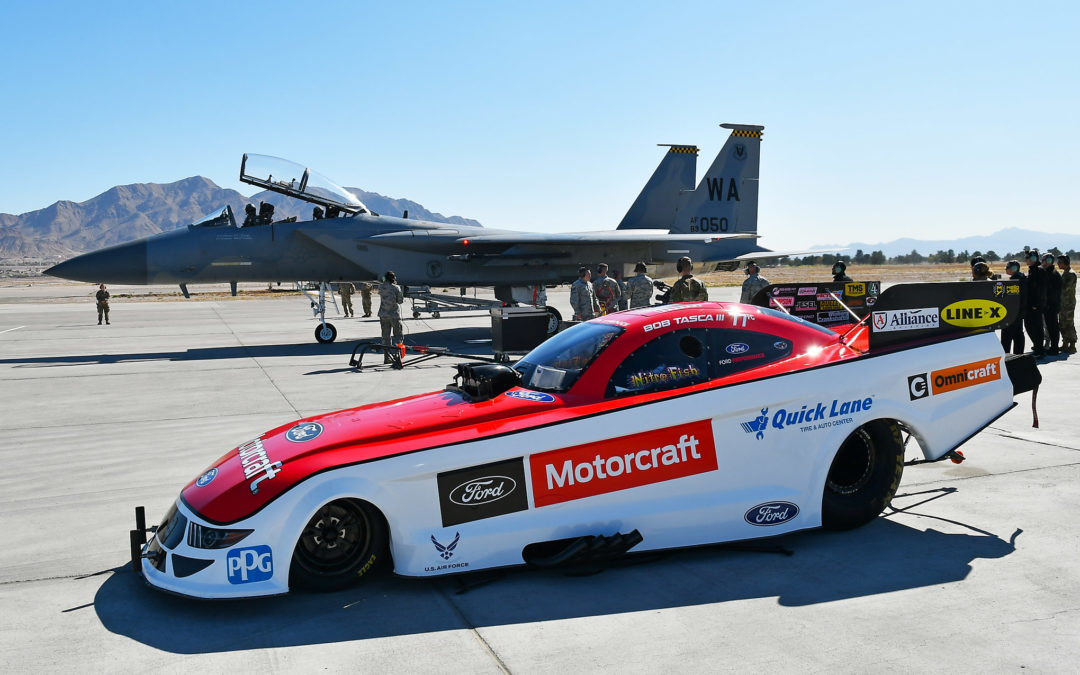 Tasca goes 330 mph in 1,000 feet on race weekends, but on Thursday he broke the sound barrier in an F-15 Eagle with the United States Air Force. He and his team took the Motorcraft/Quick Lane Ford Mustang Funny Car to Nellis to compare it to the F-15.

“It’s hard to explain the level of energy it consumes,” Tasca said. “I felt like I ran two marathons and I hadn’t left the seat. The physical demands on your body, it’s just incredible. I had so much respect for them before I got in the plane, but to see what their bodies are able to withstand while at the same time making decisions and being in combat, it takes a special kind of person to be able to do that. I was so honored to be around such dedicated men and women and I’m so grateful for all they do for our country.” 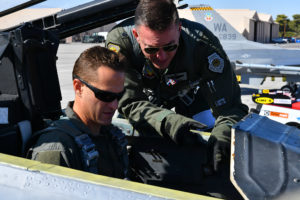 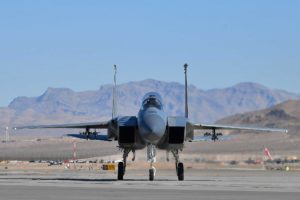 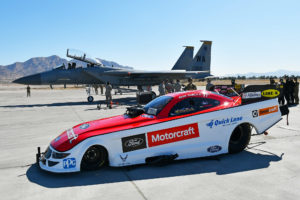 Prized by the Air Force for its maneuverability, acceleration, range, weapons and avionics, the F-15 is powered by two Pratt and Whitney F100-FW-100, 220 or 229 turbo engines with afterburners. They can reach a maximum speed of 1,875 mph in the Mach 2 class.

Tasca had previously reset both ends of his career bests this year – on land – clocking a 3.855-second run in St. Louis and reaching 332.67 mph in Reading, Pa.

“We did a barrel roll and hard banks,” Tasca said. “It’s like it’s not even real. You’re flying upside down. We went supersonic. We broke the sound barrier. It was incredible. It was so cool to go through the whole flight prep, from parachute training to ejection training, pre-mission prep, going through what we’re going to do.”

Tasca’s no stranger to flight. He gave himself the “greatest gift” when he realized a lifelong dream to become a pilot and now flies approximately 100,000 miles a year to NHRA races in a TBM 900. He more than doubled his usual ceiling of 31,000 feet in the F-15.

“I’ve always been intrigued with aviation,” Tasca said. “Being in awe of the machines the Air Force flies, the fighter planes, ultimately inspired me to be a pilot. I have so much respect for aviation and the level of details and rules and regulations they have to be able to fly a fighter plane. It’s the pinnacle of aviation, the pinnacle of performance. To be able to highlight the Air Force and their need of maintenance technicians on aircraft, how that compares to our need for technicians at Ford and Lincoln dealerships and on our race team, and the vital role they play in the success of our race team or a fighter crew, I’m very grateful and humble to be around such extraordinary heroes in our military.”

Tasca and the Motorcraft/Quick Lane team have two wins, two runners-up and three semifinal finishes so far this season in the NHRA Mello Yello Series. They are currently fifth in the playoff standings.