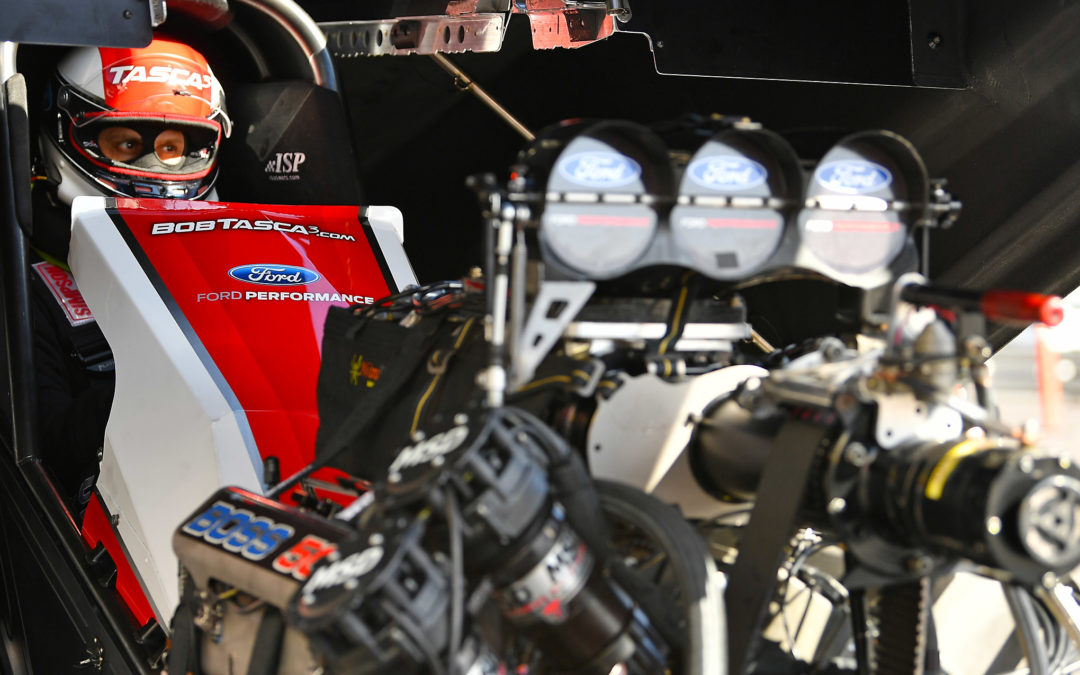 HOW DID THE TEST SESSION IN ARIZONA GO FOR YOU AND THE TEAM?

“It was the fastest and quickest car that I’ve ever driven in my career. We made multiple runs, incremental times, not full passes because we were working on a fuel system. Nearly every time I hit the throttle it was the quickest and fastest runs that I’ve ever been on. We did make one full pass in the heat of the day on Saturday. We a 3.96 (seconds) at 322 miles per hours, which I believe was third fastest of the session.

“Like anything else, a lot of new parts. A lot of new guys. We had one unfortunate incident. On the second run of the test session we broke an intake valve and it was the biggest explosion of my career. It was violent. It leveled the engine. It destroyed a brand new Motorcraft body. So, we’re working hard to get another body ready for Phoenix. We have a third body ready for Pomona this weekend that we’ll have for a spare. But we want a newly designed mounted body for Phoenix. It’s racing. Nitro Funny Cars are very unpredictable. All-in-all, we were very pleased. We had good short times. Very good incremental numbers. We’re ready for Pomona.

“It was really good for my guys to learn to work together. All my guys are experienced but have never worked together. It’s always a different pace that you work at to learn the process. The car ran great. We’re going to go to Pomona with some momentum. It will take us a race or two to get everything dialed in, but the bottom line is the we have a car that’s more than capable of winning the first race of the year. One of our goals coming out of testing was to have that level or confidence that we can go into Pomona with a car that can win, and we certainly achieved that.”

YOU TALKED ABOUT HAVING GOOD EARLY NUMBERS. DID YOU GET ENOUGH DATA TO UNDERSTAND THE FIRST 300 FEET OF A RUN?

“The hardest thing to get right is your early numbers; starting line to 330 feet. We ran the quickest low-numbers of my career. We were capable of running 3.80’s…3.85 to 3.88 bracket. So, we got that down fast. The runs wewanted to make full pulls at… the last run on Saturday night…we were trying to put an enormous number up. We have a new  fuel system on the car and we had about a gallon-and-a-half more at the hit (of the throttle) and it dropped a cylinder. The plan shutoffs, if we had taken it to the lights, the Mustang was going to run fantastic. The other thing in testing is that you don’t want to throw all your parts away, either. It’s a strategy as how you approach it. We accomplished everything we wanted to except for that last run on Saturday.

“We’re looking forward to Pomona. The track is an always better in Pomona than at testing because you’ll have a lot more car count going down it. I was thrilled about our early numbers. I was thrilled at how the guys worked together. The car ran 3.94 (seconds) and 300 (mph) but I shut it off at 800 feet. Two-hundred feet from the finish line the car rolled through the finish line with a 3.94. We were going to run a 3.87 or 3.86 under power. We’re very, very confident. I said that I wanted to go into Pomona swinging for the trophy and we’ve prepared and positioned ourselves to do that.”

TALK ABOUT THE CALLENGES HEADING INTO THE FIRST RACE OF THE SEASON?

“We have all new cars. We have a new crew chief. We have a new clutch system. We have a new fuel system and a brand-new team. We went from a bare chassis around Thanksgiving weekend to a 322-mph machine in about 45 days. I so proud of my guys for the progress that we’ve made in such a short amount of time. We’ll learn very quickly. This is a veteran team. We’ll swing with the big guys on Friday night.”

“My crew chief Eric (Lane) is very methodical. We don’t have enough data to go run a 3.79. So, we want to run 10 3.88 to 3.92’s. We want to get a lot of runs on the car, so we have data to look at. Once we get the data we can go out and refine it. If we try and go out to run 3.82 every run and you smoke the tires you’re not learning anything. I’ve never had a car that ran like this one. Every time I hit the throttle the car went down the track. Look I came back to win a championship. We have the parts and pieces and technology support of a company like Ford and the support of Motorcraft and Omnicraft and Quick Lane. We have the talent. We’re a talented group of guys that are really motivated and want to go out and race. There’s nobody in the pits that has outworked my team this offseason. Nobody. Nobody started from a bare chassis to run the numbers we did in testing. I told my guys that they should be proud about how they build race cars, wrapped trailers, moved a shop from Charlotte to Indy. It’s an unbelievable story. When you see where we started and what had to get done, it’s mind-blowing.”

HOW DID THE TEAM WORK IN THE FAST-PACED ATMOSPHERE OF A SUNDAY?

“We hot-lapped three times and I felt a whole lot better leaving the track on Saturday. Our guys nailed it. A veteran group of guys that just need to learn to work together. I’m excited. I’ve never been more confident about entering a season since I started racing than I am right now. We have unbelievable resources behind us and we’re going to go out there and have some fun. The Ford fans are going crazy and over-centered and stoked to have us back. The out-pouring of support when I post photos to social media is unbelievable. Can’t wait to start this week.”