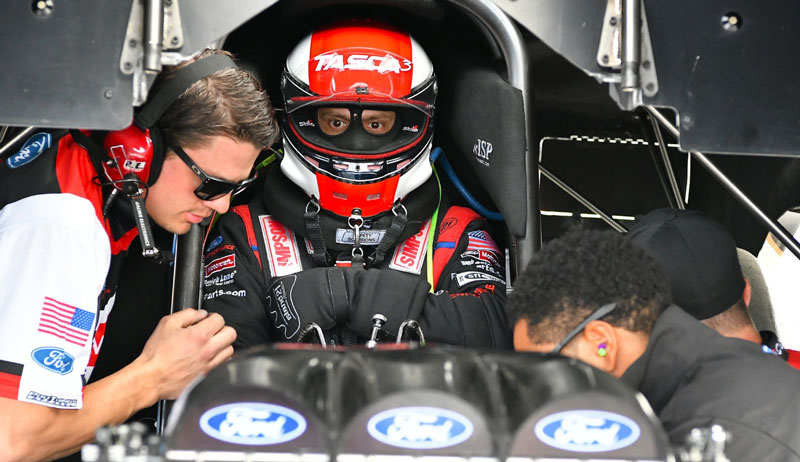 TALK ABOUT WHAT YOUR TEAM LEARNED FROM POMONA AS YOU HEAD TO THIS WEEKEND’S ARIZONA NATIONALS:

“Looking back at Pomona, you always want more on Sunday. When we evaluated the data, on Friday we were pretty happy. The Omnicraft Ford Mustang was consistent. It wasn’t as quick as we wanted but we made some good runs. On Saturday we went in the wrong direction. It’s a new clutch and Eric’s (Lane, crew chief) getting a handle on it. We just missed it. We missed the runs on Saturday which would have qualified us better. And then on Sunday, when you really look at the (elimination) run, it was the best run in the left lane. It would have beaten 11 out of 16 cars and it did what we wanted it to do.

“At the end of the day, we didn’t win the round but took a lot of positives from digesting what the data showed us on Sunday. We have a clear mission for Phoenix; we want to put ourselves in position to have lance choice for Sunday morning. That’s qualifying in the top-half of the field which puts you in a much better position for Sunday to go rounds. We’re very confident with some small adjustments – I’m talking three grams of counterweight, a few turns of the flow, we’re going to accomplish a lot in Phoenix. We’re very close. The motor made big, big power which is critical, and we achieved that in Pomona. We just didn’t have the right clutch setup. With some minor changes in the bellhousing, this Mustang is going to go out and surprise people this weekend.”

“I can tell you it’s all relative. When we went to Phoenix to test it was a very green track with a very low run count. The clutch setups were very different than leaving Pomona. When you go to a national event and you have hundreds and hundreds of cars going down the race track, it’s just a different race track. This weekend will be very different from testing because of the weather. It’s going to be much cooler and we could see national records getting taken down. We start looking at the weather four or five days out and you see a high of 61 degrees on Friday and a high of 61 on Saturday and a high of 68 on Sunday, those are national record-type of conditions. The cars are going to make big power and the race track is going to be cooler. I think the setup will be very different from when we tested when it was 80 degrees outside.”

HOW DO YOU BALANCE PROCESSING YOUR DATA COLLECTION VERSUS HOW THE OTHER COMPETITORS ARE RACING?

“We just focus on our car. Our issue is that our early numbers must get quicker. If we can get our number up to 200 feet better and get our driveshaft faster, our car will run a mid-to-low 80 (3.80 seconds). We must do what our car is telling us to do. We see the numbers that our competition is running. We see the split times and time sheets. We have to pick our car up early. Eric (Lane) is going into the weekend with a clear direction on some specific things that we want to change in the clutch. When we get those early numbers where we want them to be, this car will run at the top of the (scoring) page. We know that because we have the best parts that money can buy. We have a tremendous and talented group of people who tune this Funny Car.

“One of the things that I want to compliment the team on is that we had a brand-new car, a ton of new parts and a brand-new team in Pomona. Not one guy had worked together before on this team and the team performed flawlessly. Every time the car went to the starting line it was bolted together right. We were ready to go on time. And as the weekend unfolded the team got better and better. As a driver I was very pleased knowing that I sat in the race car and the thing was bolted together correctly and that is more than half the battle. If the team can deliver the crew chief and the driver a car the same way every time, then the driver can do his job and the crew chief can make changes and see results on the track.”