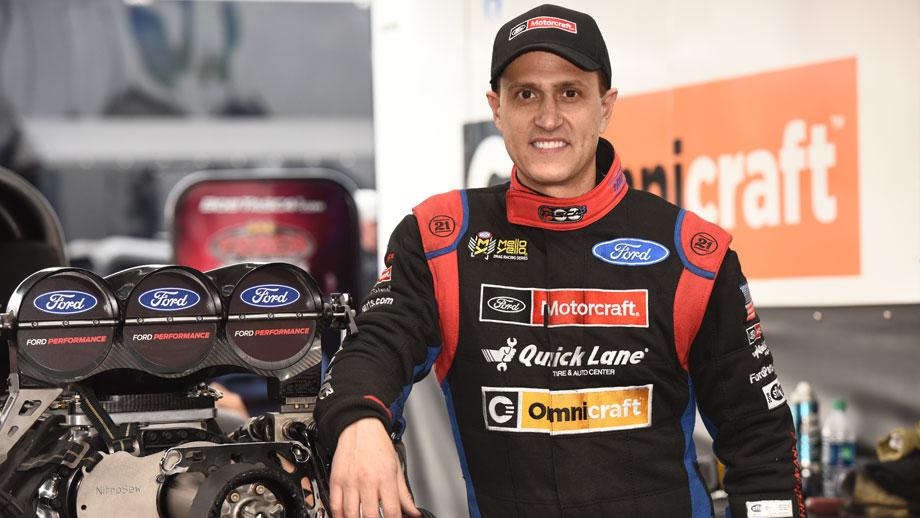 This article is by NHRA.com Staff.  Click here to read it on NHRA.com.

Everything is starting to go according to plan for Funny Car driver Bob Tasca III, and that could make for a memorable celebration when the Hope, R.I., native heads to New England Dragway for the sixth annual NHRA New England Nationals on July 6-8.

Coming off his first final round of the 2018 NHRA Mello Yello Drag Racing Series season at Bristol in his 10,000-horsepower Ford Performance Shelby Mustang, Tasca is thrilled with the progress his team has made in recent weeks. They have jumped into the top 10 in the loaded Funny Car class, and Tasca, who has returned to full-time competition for the first time since 2014, believes his team is building up to something big at a track where he made his first pass.

“This is what I dreamed about,” said Tasca, who has four career wins. “I dreamed about being in a program and having a race car and a team that can win races and run low E.T. at will. We have that kind of car going into Epping. That’s my home track, the first track I ever went down and there’s not a person there who is not pulling for you. That’s the stuff you dream about as a kid, and I’ve never been more excited about racing than I am now.”

Brittany Force (Top Fuel), Matt Hagan (Funny Car), and Erica Enders (Pro Stock) were last year’s winners of the event that will be televised on FOX Sports 1, including live finals coverage starting at 1:00 p.m. (ET) on Sunday, July 8. It is the 13th of 24 events in 2018, as the race will take place in July for the first time. Massive crowds have been the norm for the race, and as the second half of the season kicks off, many of them will be pulling for Tasca’s first win since 2012.

Tasca and his team, led by crew chief Eric Lane, have made significant progress in short time. He got the full-season commitment from Ford less than two months before the season-opener in Pomona, but the team has come on strong at recent races. Tasca advanced to the semifinals in Chicago before falling in a thrilling side-by-side duel with 2016 world champ Ron Capps in the final round at Bristol. It was a big step, but it only furthered Tasca’s belief that he has a group capable of winning races and competing in the Mello Yello Countdown to the Championship.

“We’ve built a team of guys who give it everything they have every run,” said Tasca, who also qualified fourth in Bristol. “We have not lost sight of the goal and the goal is to put ourselves in a position to run for a championship. We knew we would take some licks along the way, and we have taken our share, but we’ve never taken our eyes off the prize and that’s putting our team in a position to run for a championship. I’m thrilled and excited about where we are, but it’s all about moving up the ladder. There’s no reason why we can’t be a top five car going into the Countdown.”

To do that and also win in Epping, he’ll have to get past the likes of points leader Courtney Force, who has four wins in 2018, Jack Beckman, defending winner Hagan, reigning world champ Robert Hight, and two-time season winner J.R. Todd. But Tasca, who is seven points ahead of Shawn Langdon for 10th, has big goals for 2018 and in his eyes, he is just getting started this season.

“This team is the real deal,” Tasca said. “As difficult as the start has been, we’re exactly where we want to be. I can’t say enough about Eric Lane. He’s shown me what I’m capable of. I’ve never driven better than I have at this point in my career and I have never believed in a car more than the one I have now. I’m a veteran driver with veteran people on our team, and we want more. We’re not happy going to the finals and being in the top 10. We want more.”

Mello Yello Drag Racing Series qualifying will feature two rounds at 4:30 and 7 p.m. on Friday, July 6 and the final two rounds of qualifying on Saturday, July 7, at 1:30 and 4 p.m. Final eliminations are scheduled for 11 a.m. on Sunday, July 8.

To purchase general-admission or reserved seats, call (800) 884-NHRA (6472) or visit www.NHRA.com/tickets. Kids 12 and under are free in general admission areas with a paid adult. To honor the Salute to First Responders, military and first responders can save 20 percent on general admission tickets at the gate.