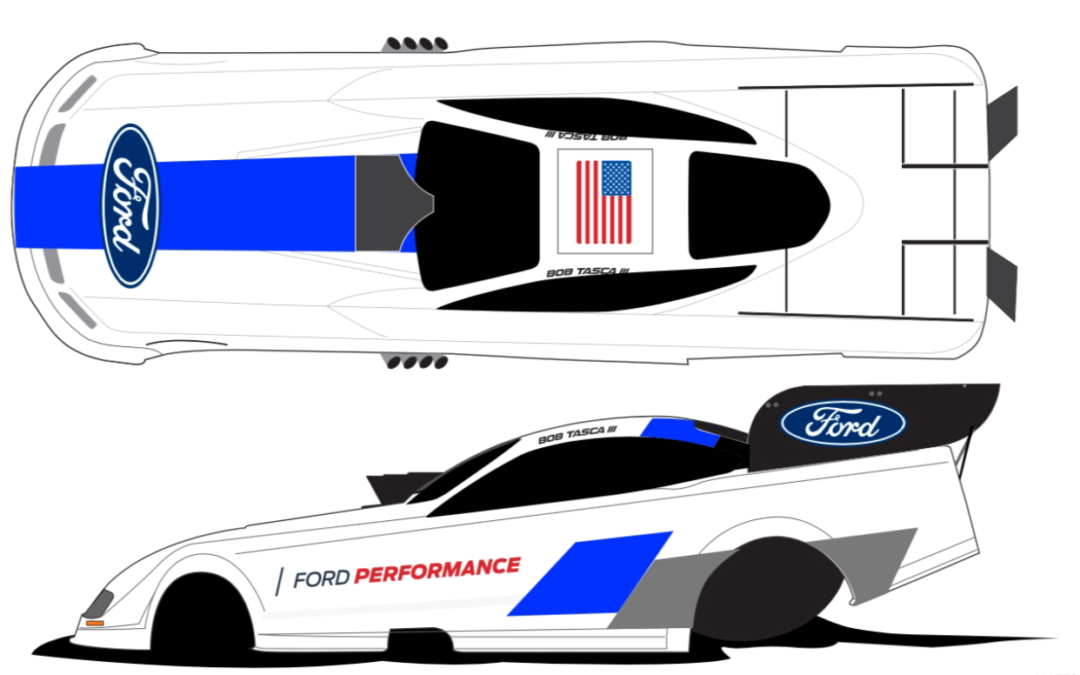 • Ford to bring its iconic drag-racing legacy behind veteran driver Bob Tasca III and Tasca Racing’s NHRA Funny Car Mustang for the 2018 season
• Ford Performance joins effort to assist with aerodynamic development, an area where Ford has invested heavily in with a goal of transferring innovations and engineering talent to the key challenge of making vehicles more efficient
• Ford to use involvement to reach out to loyal NHRA fan base for business and recruitment of dealer technicians and mechanics

LAS VEGAS, NV, October 31, 2017 – Ford will bring its legendary performance legacy to help fuel Bob Tasca III’s Mustang Funny Car for the 2018 NHRA drag racing season.
Ford Performance will help the team make the car as “slippery” as possible through the company’s investments in aerodynamics engineering, including racing and production vehicle wind tunnels.
Ford and its selected brands will sponsor Bob Tasca III and Tasca Racing for the entire season as the primary sponsor for 16 races, and as a co-sponsor the rest of the season, building on the company’s legacy of drag racing that dates back to the start of the sport.

“We’re excited about partnering with Tasca Racing and helping them return to NHRA for a championship run,” said Dave Pericak, global director, Ford Performance. “We believe we have the technology tools to help the team be competitive on the track long-term, and are looking forward to the effort starting in 2018.
“The Tasca family has always been a pioneer in racing, and a leader in Ford vehicle and parts sales for many decades,” said Pericak. “This partnership will only serve to strengthen that legacy.”
During his decade as an NHRA Funny Car competitor, Tasca has four race wins, 11 finals appearances and qualified for the Countdown to the Championship three times. His career best ET is 3.892 and his career best speed is 326.56 mph.

With Tasca Racing’s new technical alliance with Don Schumacher Motorsports, and the engineering support of Ford Performance, the team is focused on making a run for the NHRA Funny Car title.

“This is a very exciting day for me personally, and for everyone involved at Tasca Racing,” said Bob Tasca III. “We have always been a Ford family and have a long history with drag racing, so to be able to return to NHRA Funny Car full-time in 2018 with the support of our long-time friends at Ford is the perfect scenario for us.

“This is something we have been working on for months now, so it’s great to be able to finally talk about it. We are ramping up for a full-season effort on the track, but also are ready to start working with our Ford partners to help reach their business goals and to help recruit technicians and mechanics for Ford dealerships by leveraging the NHRA platform. My team is focused on winning a Championship for all the Ford fans that have supported Tasca and Ford since the 1960’s! My grandfather coined the phrase ‘Win on Sunday, Sell on Monday.’ That statement is alive and well within the NHRA. We can’t wait to get started.”