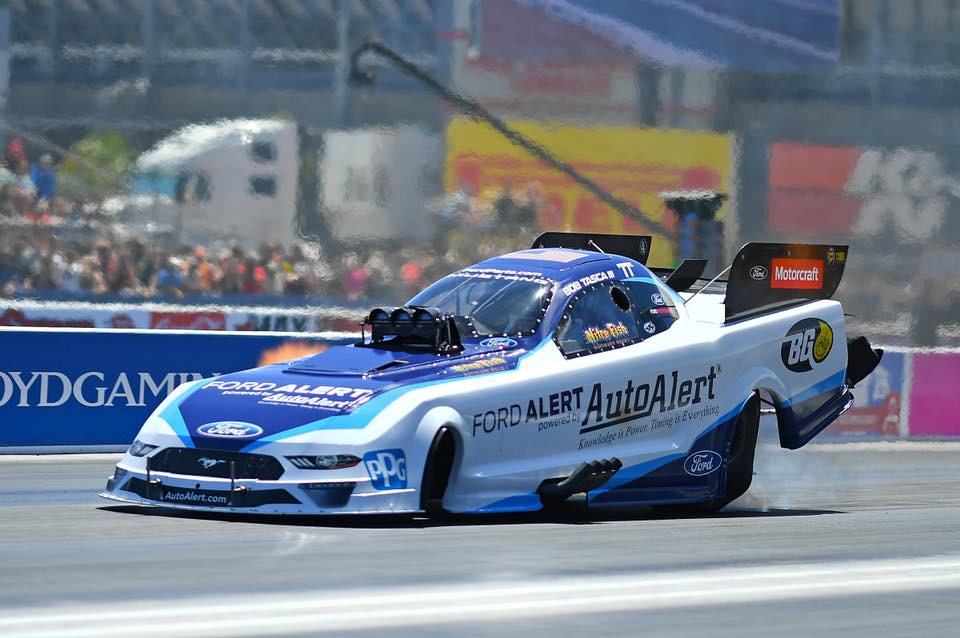 LOOKING BACK AT LAS VEGAS, IT MUST BE A BIT FRUSTRATING THAT YOU DIDN’T GET A ROUND WIN DESPITE HAVING A FAST FORD MOTORCRAFT MUSTANG?

“Without bad luck we wouldn’t have too much luck. But we’re digging as hard as we can and they’re a lot of great things ahead for this Motorcraft Mustang Funny car. When you look back at Vegas, we would have won every (first round) quad except for the one that we seeded in. It’s just amazing. The good news is that we testedon Mondayafter Vegas. I was really ticked-off at how the car was launching to 60-feet. My reaction times have been poor, and the car has been slow early since the beginning of the season. We made some substantial changes to the weight balance and clutch. We ran 3.96 at 320 mph twice on a 120-degree track. Robert Hight ran 3.96 and (Jack) Beckman ran 3.95. Those were the three-quickest runs of the entire day. The car really picked up on the early numbers. We’re happy with the test. So all-in-all we weren’t disappointed in Vegas, it’s just so tough in this class.”

TALK ABOUT HOUSTON AND THE CHALLENGES THIS WEEKEND BRINGS:

“It should be warmer. Eric (Lane) does an excellent job at tuning for a hot race track. We’ll look at the adjusted altitude numbers, water grains, and other data. We really try to make the same power every time that we run. The biggest thing that I’m excited about Houston is how the Vegas test went so well. We just needed the car to react better when I hit the throttle which plays directly into 60-foot times. We’re consistently one of the slowest cars to 60 feet this year, yet one of the quickest cars from 60 to 330 (feet). So, based on the test session we were able to improve my reaction time by almost three-hundredths based on changes to the clutch. We were also able to pick up our 60 feet by two-hundredths. That’s huge. To find three, four, five-hundredths before you go by the starting lights is amazing and that will only multiply as you go down the race track. I was happy with how the car ran. We got the motors happy. We’re not blowing engines. We found a nice combination in the engines. The track is going to be hot. To go down the track in Vegas during that Q4 session, we were third or fourth-quickest to put us the sixth-fastest in qualifying. That was a monster run. We had a lot of pressure on us. We made a great run on a hot race track. We could see a hot race track in Houston. We’ll be at sea level. I’m just excited coming off the test session. I think we’ve turned the corner on improving our early numbers.”

IT’S NOT AN EASY PROCESS. YOU’VE ONLY HAD AROUND 24 FULL PULLS ON THE CAR THIS YEAR. THAT’S A TALL TASK FOR A NEW TEAM:

“We know that we haven’t won an elimination round this year. The bottom line is we were fifth-quickest on Sunday. We would have won any other quad that round. In Gainesville we would have beaten 13 out of 16 cars on Sunday’s first round. We raced the guy who put down low E.T. In Phoenix we would have beaten 11 out of 16 cars (in the first round). Our team has performed, made some good passes and just haven’t caught a break on Sunday. You need some luck in this sport. It will eventually come our way. The bottom line is that we have a car that goes down the track consistently. We have consistently improved our qualifying positions since Phoenix. We’re coming off a fantastic test session which gave the quickest and fastest reaction times in 60 feet all season. In the heat of the day in Vegas, we were the second quickest in the test and only one-hundredths behind the quickest car. I’m excited to get to Houston. This team is building more and more confidence and we’ve shown great promise. It’s only a matter of time for us to start going some rounds.”