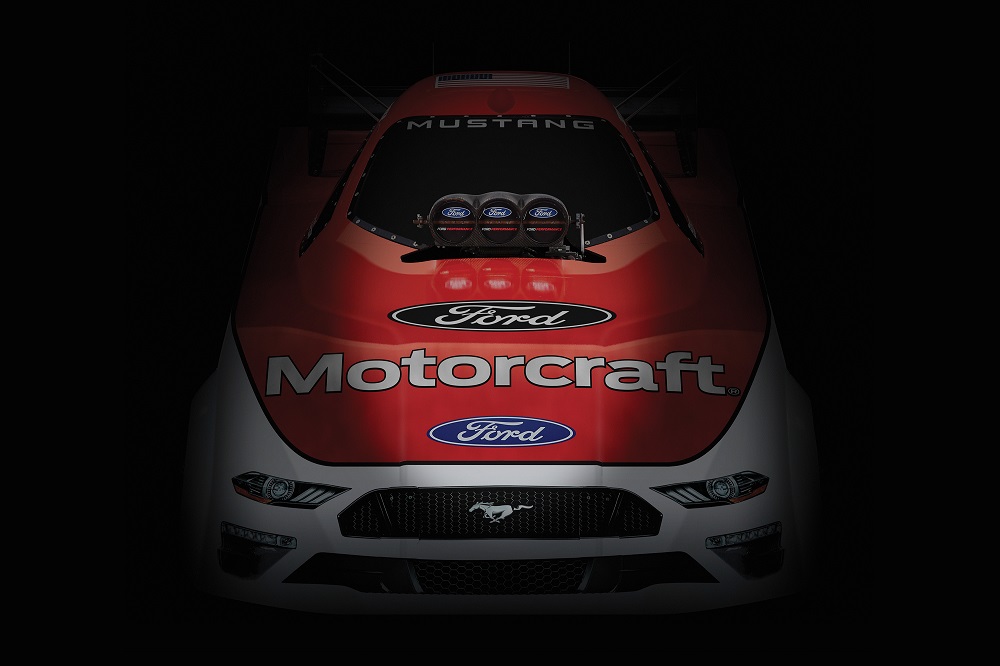 DEARBORN, Mich., Apr. 18, 2018 – Ford made headlines this year when it officially returned to the NHRA Mello Yello Drag Racing Series after a three-year hiatus.  Next year figures to be just as noteworthy when Ford Performance rolls out a new Mustang Funny Car body for NHRA competition.

Mark Rushbrook, global director of Ford Performance Motorsports, made the announcement today as part of a week-long Mustang birthday celebration.

What makes this new version of Mustang unique is that Ford Performance engineers and designers are utilizing many of the same technical tools and resources employed in the NASCAR and IMSA Ford GT programs to create a body that emphasizes aerodynamic efficiency.

“We’ll be applying all our advanced aerodynamic tools in the development of this new Mustang Funny Car,” said Rushbrook.  “These are the same tools and resources such as CFD, scale model and full-size wind tunnel testing that we have used to develop the Ford GT race car and are using to develop the new Mustang for NASCAR.  These are the exact same tools we use in our production car process, so it allows us to use racing development as a way to create better cars and trucks for our consumers.

“It has been quite a few years since we last did a Mustang Funny car body for competition, so we are very confident we will be bringing a competitive car to the track next year.”

This will mark the first new body for Mustang in Funny Car since 2009, reinforcing a commitment Ford made to the sport when it officially returned this season with driver Bob Tasca III.  And even though he has to wait 10 more months before getting to drive it in competition, Tasca is already fired up for what lies ahead.

“I’ve seen some of the early aero numbers and it’s absolutely incredible how slippery the car is going to be on the race track,” said Tasca, who has made it to the final round 11 times in his NHRA Funny Car career and posted four victories.  “When you’re trying to find hundredths and thousandths of a second on a race run, having an aerodynamic piece like the Ford Performance engineers are giving us will make all the difference in the world.”

Ford has a championship heritage in the NHRA Mello Yello Drag Racing Series, having won 238 overall events in Funny Car and 16 championships.

The new Mustang Funny Car is in the early stages of development, and after approval by the NHRA, will be shown to the public late this year.  It will make its competition debut at the NHRA Winternationals in Pomona, Calif., next February.