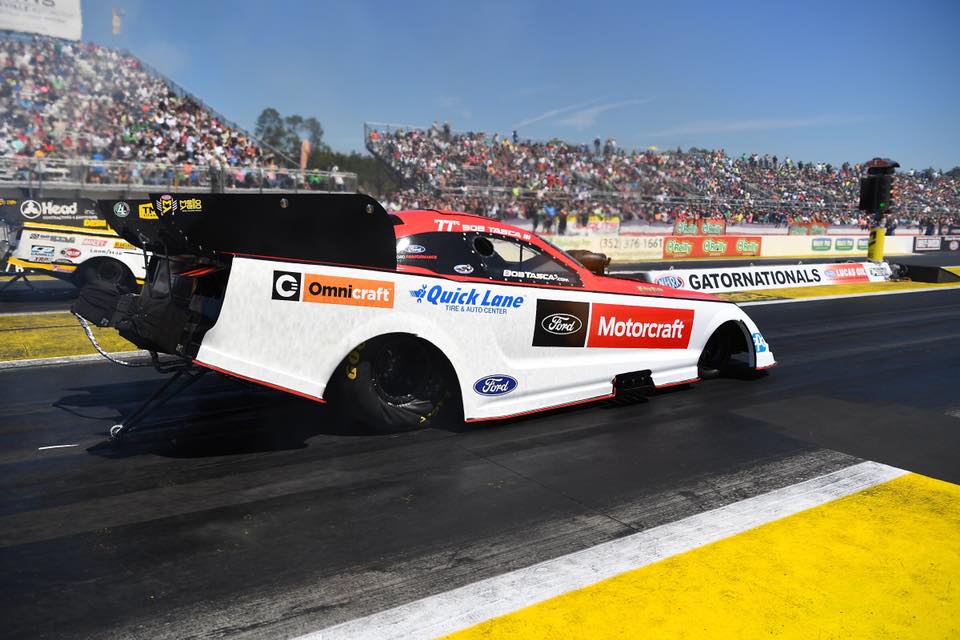 BACK TO THE WEST COAST THIS WEEKEND FOR THE FOUR-WIDE NATIONALS AT THE STRIP IN LAS VEGAS. TALK ABOUT RACING THERE:
“I can’t wait to get to Las Vegas. The way we ran in Gainesville and the progress we made is exciting. I don’t know if I have run three for four (in qualifying), second quickest in qualifying and lose a heart-breaker against (Ron) Capps in the first round of eliminations. In two races – Pomona and Arizona – we were still sorting things out. We hit Gainesville hard and put everybody on notice that this team is right on the cusp of big things. If we can pick up where we left Gainesville, I think we’ll come off the truck fast. No wholesale changes for this weekend. We made some substantial changes going into Phoenix. We made some massive changes going into Gainesville. This will be the first race that we’re going into a race with no tremendous changes. We stumbled on our setup in Gainesville. The car ran exceptionally well all weekend. We pressed a little too hard in the Friday night session. We were trying to put down a big number. I’m excited. I’m ready to go. We know that this Motorcraft Ford Mustang is going to be fast.”

WEATHER CONDITIONS LOOK TO BE WARM FRIDAY AND SATURDAY, UP IN THE MID-80s. YOUR TEAM HAS A GOOD WARM WEATHER TUNE-UP THIS YEAR:
“For sure. We are really dialed-in on the warm weather tune-up. We made some great runs in warm conditions in Gainesville. It’s going to be in the mid-80s in Las Vegas which will play to our favor. We’re still going to have an opportunity on Friday night to swing hard. We’re going to test on Monday regardless of how the weekend goes. This is going to be a full weekend. We’re starting to get ready for the meat of the season. The weather is starting to get warm. We go from Las Vegas to Houston to Charlotte to Atlanta. We’re going to really hit it hard the next few races.”

WHAT ARE THE BIGGEST CHALLENGES WITH RACING FOUR-WIDE?
“I have never had an issue racing four-wide. I’ve always done really well and felt very comfortable with it. Some of the other drivers have had challenges. There’s two big differences for me. Reacting against the tree doesn’t change. But staging the car in eliminations changes dramatically. Where normally you have to worry about one person, now there’s three. Who’s in? Who’s not in? Who went in first? That part of it requires another level of concentration. Once everyone is in the lights, amber means “go”. You just need to have more attention to staging. On race day it’s just about getting to the finish line first. You have to get it to the finish line. You have very little line of sight of what’s going on around you. You’re doing what ever you have to get the car to the lights.”

IN LAS VEGAS YOU’LL HAVE THREE OTHER CARS AND 28,000 HP AROUND YOU. DOES THAT MAKE A NOTICEABLE DIFFERENCE INSIDE THE CAR?
“The only noticeable difference for me is the burnout. Normally, if you only race against one car you don’t hear anything. Now you hear three “brrrrrrps” and that’s odd. When you hit the throttle there’s so much energy in your car that you can’t really hear anything.”

OTHER THAN AN EVENT WIN, IS QUALIFYING IN THE TOP-HALF OF THE FIELD THE NO. 1 PRIORITY THIS WEEKEND?
“That’s the one piece this season that we haven’t accomplished yet. I fully expect us to be in a position to be inside the top-eight in qualifying in Las Vegas. We want to qualify in the top-half. We want lane choice. I can’t chalk up lane choice to any of our losses this year. However, I can certainly chalk up our first-round losses to not qualifying well. When you have one of the best running cars in Gainesville, but you didn’t hit the Friday night session right, that’s disappointing. We had the third-best car in Gainesville with (Jack) Beckman and (Ron) Capps. That’s what qualifying in the bottom-half will do to you on Sunday.”

ARE THERE ANY COMMON DENOMINATORS OF RACE DATA THAT THE TOP CARS HAVE SHOWN SO FAR THIS YEAR?
“I think it’s all early numbers. We were the best car in Gainesville from 60-330 feet. We ran strong all weekend down low. Our zero-to-60-foot numbers have been off by less than two-hundredths. We’ve been slow off the line, so we’ve made some changes. We need to get our 60-foot numbers better. If we can do that our car will score on the top of the page.”