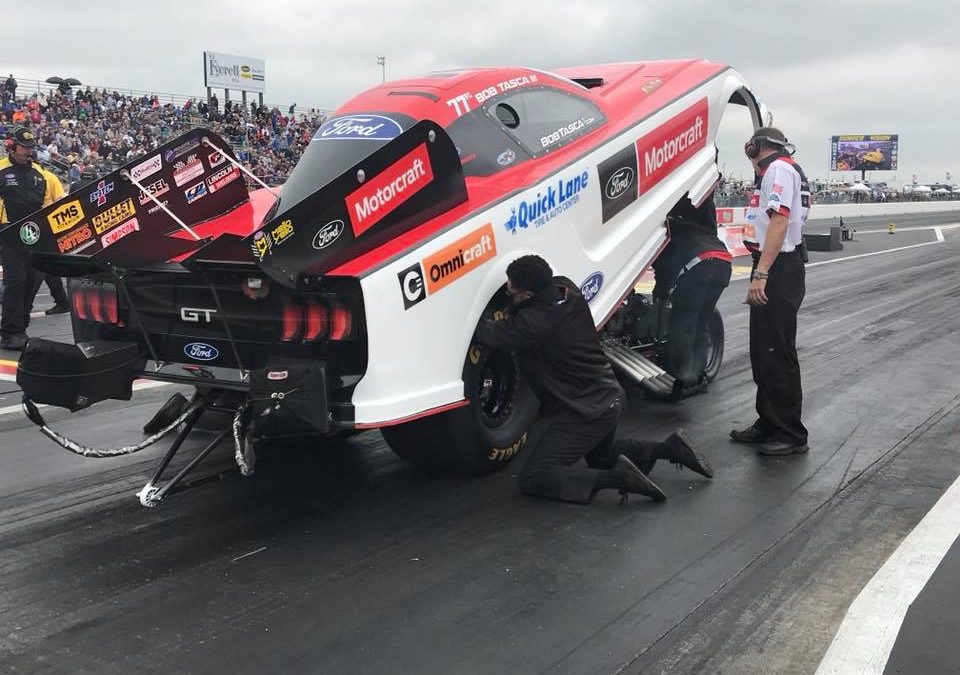 GETTING THAT FIRST ROUND WIN IS WELL OVERDUE FOR YOUR TEAM:

“For sure. I’m very pleased with the progress that we’ve made on Friday and Saturday with consistent qualifying. We just haven’t put it together on Sunday. That’s the bottom line. I never would have thought that we’d be going into Charlotte without a round win. In the same breath our next round win could be our next race win. That’s the type of team that we have right now. We’ve come up short on some really close races. Last Sunday we just got too aggressive. We pressed too hard.”

DO YOU BELIEVE IN MOMENTUM?

“For sure. I joke with my guys that when our luck changes, we’ll be able to win races with the parachutes out at halftrack. I really think this sport is one that when you get on a run and it’s like you’re Superman. Other times nothing goes right. Clearly, luck has not been on our side so far this season. At the end of the day they don’t hand the championship trophy out at Charlotte. If we’re building towards positive momentum, now is the time to start.”

THERE’S NO EASY ‘OUT’ IN THIS YEAR’S NHRA FUNNY CAR CLASS:

“It’s a tough deal. The bottom line is we must be better on Sunday. I think the team is in a great position going into the meat of the season. We just need to capitalize on it on Sunday. We are going to run hard this weekend. We’re going to test on Monday and get ready for the summer stretch. Eric (Lane, crew chief) over the course of his career has performed exceptionally well with the NAPA car. They just dominated all summer. I’m very optimistic. It’s frustrating not to have much to show for on Sunday and that’s what we’re focusing on to change.”

IS THE CHALLENGE THAT YOUR TEAM IS A 3.95-SECOND CAR AND YOU HAVE TO BE ABLE TO RUN IN THE HIGH 3.80S TO GO ROUNDS ON SUNDAY?

“Oh yeah. There’s no question. Eric (Lane) was trying to run a 3.88, 3.89 in Houston and we missed it. In fairness to Eric, you won’t win a championship if you can’t run a 3.88. We didn’t make a big swing. The E1 run in Houston was an absolute trace of an 88 (3.88 second) run that we made last year. You couldn’t put a pencil on the line any better. It just didn’t hold on. We need to make those big runs in qualifying and I think that’s what we’ll do in Charlotte. We have plenty of data on 3.95s and we now have data of runs of 3.88, 3.87 that didn’t make it. So, if we can split the difference I think that you’ll see this Motorcraft car go run low 3.90s, high 3.80s this weekend. That’s the last trick in our toolbox that we haven’t been able to pull out. We’re so close we can taste it. Eric was confident that he could run it (high 3.80 second run) in E1 (at Houston). The points are tight. I said that I wanted to be inside the top 10 when we leave Atlanta and we’re more than capable than doing that. We just need to go out there and do in now.”

FOUR-WIDE RACING AGAIN THIS WEEK. IS THERE ANY DIFFERENCE BETWEEN CHARLOTTE AND LAS VEGAS?

“Not really. I don’t think there is any difference. We qualified well in Las Vegas. Conditions this weekend in Charlotte are going to be good. It’s not going to be a hot weekend. The track is tremendous in Charlotte. I have no doubt we’ll run very well. I just believe this; it’s all about putting your team in a position to win. Everything to this point is exactly in line with that. We’re more consistent. We’ve qualified better. We’re doing everything we’re supposed to do to prepare ourselves to win on Sunday. That’s all you can do. Now we just have to keep doing that and get better on Sunday.”